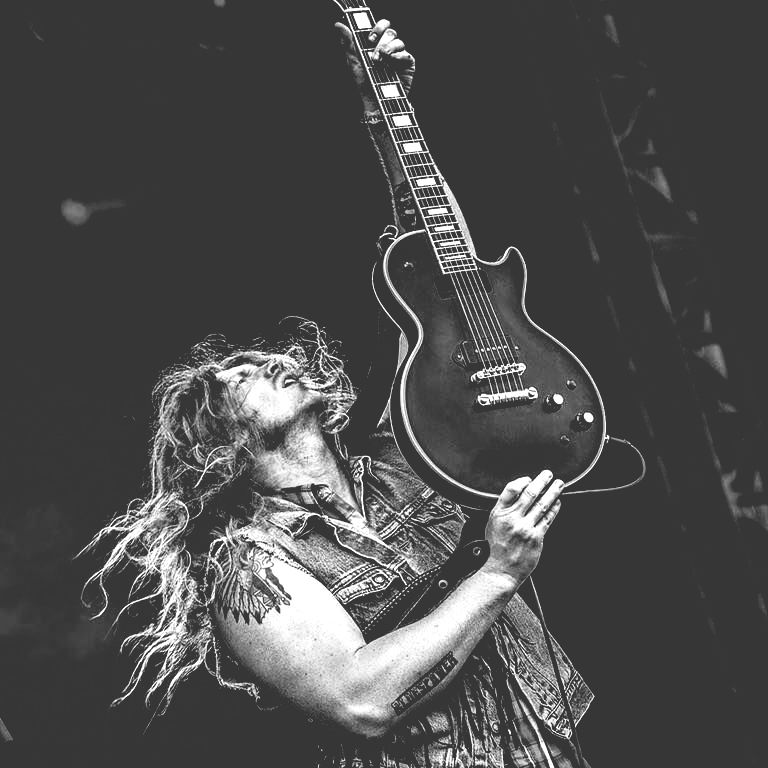 You can’t teach the blues. It’s not something that can be codified in music books or learned on YouTube. It goes much deeper than that and it comes from the inside. It’s about the way the guitar strings are bent and the sound gets transmuted directly from a player’s soul. It’s simple at the end of the day. Either you’ve got it, or you don’t. JARED JAMES NICHOLS has definitely got it. The Wisconsin-born, singer, writer and guitarist’s channels blues grit and gusto through bombastic arena-size rock ‘n’ roll. It’s raw, raucous and righteously real.

As soon as he got his first guitar at 14-years-old, the stage immediately called to Jared. Maybe it had something to do with the fact that he grew up minutes away from The Alpine Valley Resort— where Stevie Ray Vaughan performed his last show. However, no divine coincidence could truly foreshadow just how adept at the six-string he would eventually become. He personally traces the beginning of his story back to a blues jam that his mother brought him to. “Two weeks after I got an electric guitar, I was on stage with all of these old cats from Chicago playing the blues,” he recalls with a smile. “The music immediately resonated with me. It was all about the feeling and the soul behind it. None of these guys were music nerds. They were true blues guys playing what they felt. That power and reality struck a chord in me. ”

Soon, he found himself practicing for twelve hours every day. Hitting up the local jams, he ended up sharing the stage with legends including Buddy Guy, “Honeyboy” Edwards, and “Big Jim” Johnson as well as opening for Kenny Wayne Shepherd and Derek Trucks. By his 21st birthday, he had logged over 500 gigs.

After a short stint at Berklee School of Music in Boston, he headed out to Los Angeles where he garnered numerous accolades at the world-renowned Musicians Institute, winning the 2010 Jerry Horton guitar contest, the 2011 Les Paul tribute contest, and the 2011 “Outstanding Guitarist” award. 2012 saw him release his debut EP, Live at the Viper Room, gaining the notice of both Guitar World and Guitar Player Magazines.

Jared has teamed up for recordings with Aerosmith engineer Warren Huart, Classic Rock Legend, Eddie Kramer (Hendrix, Humble Pie, Zeppelin), Bob Marlette (Skynyrd) Tony Perry (son of Aerosmith’s Guitar Legend, Joe Perry) and Producer/Mixer Jay Ruston (Anthrax, Stone Sour). He has released 2 full length Albums: “Old Glory & the Wild Revival” (2016) and “Black Magic” (2018) and 2 Eps: “Live at the Viper Room” (2012) & Highwayman (2016) His newest single, “Nails (in the coffin)” was produced and co-written by Mark Jackson & Ian Scott, the team behind the hit song “The River” by Bishop Briggs. They have helped take his dark tales and guitar heroics to a new level of a Modern Blues sound for a new generation.

On stage, it truly comes to life with his power trio rounded out by the Swedish born drummer Dennis Holm and young bassist Baron Fox. Jared’s presence becomes amplified with guitar in hand. Audiences have experienced that everywhere from his performances at NAMM and SXSW to tours supporting Lynyrd Skynyrd, Zakk Wylde, Walter Trout, John 5, Living Colour and Glenn Hughes of Deep Purple fame.

In 2016 Jared was featured in a mini documentary feature series called “Uncharted” sponsored by Honda thru Uproxx.com. In just 2 weeks the clip had been streamed over 4 million times and led to Festival bookings at The Stone Free Festival at London’s 02 Arena and Azkena Rock Festival in Spain. He continued to trek across the Globe in 2017 including Festival dates at Hellfest, France (supporting Aerosmith) Ramblin Man Festival, England and Steelhouse fest, Wales. 2018 and 19 had him adding Wacken Fest (Germany), Rock The Ring (Switzerland) & Sweden Rock to his festival resume.

Jared has also become the accomplished social media influencer with 115,000 Instagram followers & 50,000 Facebook friends. He has been featured in numerous Youtube videos including hosting the vintage guitar show “Fretted Americana” which have garnered 500,000+ views to date. His engagement on social media has him at over 1 million people per week.

His years of dedication to his instrument and avid fan base have recently culminated with the release of his own signature “Old Glory” Gibson/Epiphone Les Paul Custom and Blackstar JJN20 watt Amplifier. Both have broken sales records for a debut signature artist product. He has already performed over 200 dates in 2019 and isn’t stopping anytime soon. All in the name of spreading the gospel of “Blues Power”. Ultimately, he lives up to that idea of Revival from his debut album’s title. “I want people to get excited,” he concludes “I want them to feel anything is possible in this music. I want them to know great Rock n Roll exists. If I can give someone that same inspiration I was blessed with, I‘ve done something right.”